With over six thousand townhomes built between 1960 and 1980 among their housing stock, all at a life cycle tipping point, Ottawa Community Housing (OCH) knows that they will need a strategy for renewing these assets and bringing them to Net-Zero greenhouse gas (GHG) emissions. Their Ottawa Community Housing’s Net-Zero Prefabricated Exterior Energy Retrofit (PEER) Demonstration Project was a step towards developing that strategy, and the kind of step many will want to follow in. 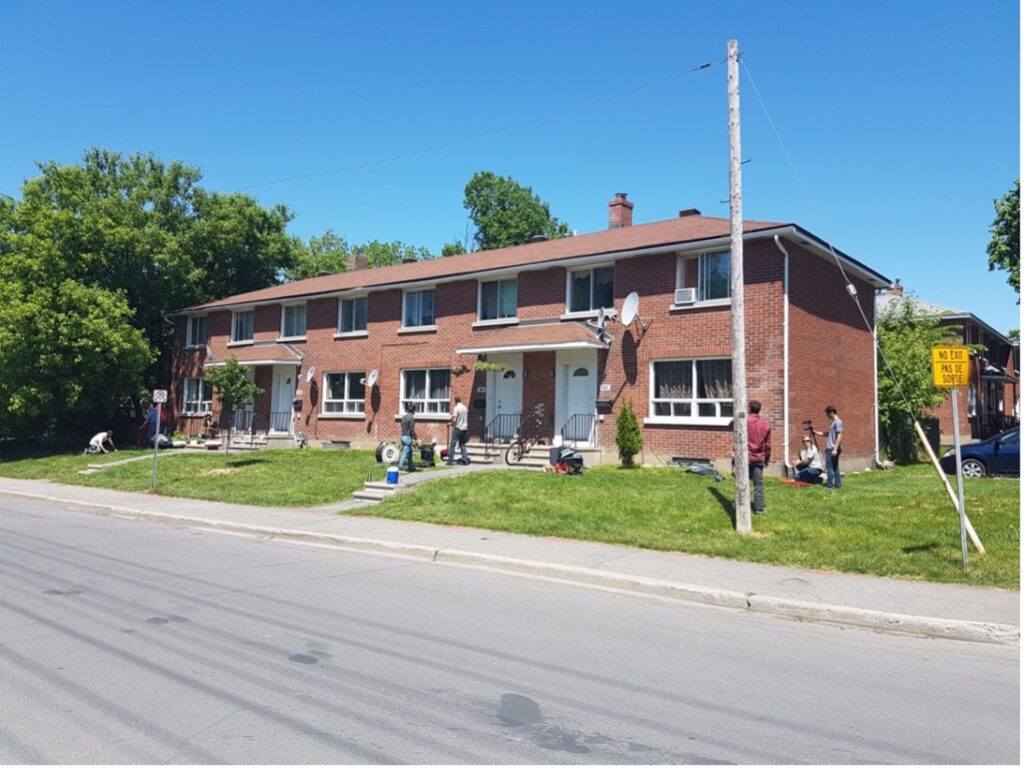 The preparation of a full-scale demonstration retrofit of an occupied four-unit block of townhomes began in 2018. Over a year of feasibility testing took place, ensuring a solid understanding of the existing conditions and the success of the pilot project.

A business case that was presented to the OCH Finance Department. The total capital plus the maintenance expenses for the next 30-60 years for the site and the annual energy cost were quantified and converted to a Net Present Value justifying a deep energy retrofit price.

To do this the actual total cost of building ownership between the “business as usual” and the retrofit scenario were compared. The case study showed significant savings (over $500k) for doing deep energy retrofit if the building was to be held as a long-term asset.

With a strong understanding of the existing building and approval for the financing, including a $500K contribution from Natural Resources Canada, the team embarked on a detailed design of the panels and retrofit logistics.

In 2019, they engaged mechanical, electrical, and structural engineers, architects, and a dedicated panel designer to put together the retrofit specifications. The specifications were submitted for building permits at the City of Ottawa and inputted into an energy model to ensure that they had a theoretical Net-Zero GHG and Energy Design.

Once they had an approved building permit, the team began construction and site preparation. In 2020, The OCH team created an offsite fabrication facility with equipment capable of manipulating the 20×9-foot panels the project demanded and making large cuts into the oversized panels. The twenty-four panels, composed of eight inches of EPS, two OBS sheets, a self-adhesive air vapour barrier protected by strapping and cellular PVC siding, were all fabricated and delivered to the site by in-house OCH staff. 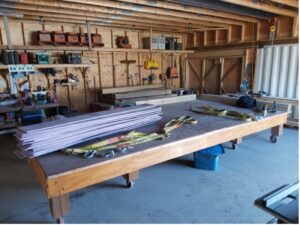 Before panel installation began, the site’s electrical system needed an upgrade and the old natural gas mechanicals were removed and replaced with electric heat pumps. Ultimately, each unit would receive a new two-hundred-amp panel, a heat pump domestic hot water tank, and a heat pump furnace integrated into existing ductwork to provide heating and cooling.

Each unit would also receive an Energy Recovery Ventilator, which offers active fresh air required when the airtightness of the building is improved so much. The panel installation begins below grade, where the team excavated to the footing to replace the weeping tile and installed a waterproof membrane and 8 inches of EPS against the foundation. The above-grade prefabricated panels were installed on the building by OCH staff using telehandlers and cranes with laser precision. The below-grade membrane ties into the above-grade panel to provide continuous air barriers and insulation.

One notably innovative aspect of the OCH pilot is that existing exterior finishes were left intact. Except for cutting off the eves, the brick cladding and the asphalt shingles remained. A new panelized building enclosure essentially wrapped the entire structure. This reduced the demolition costs, noise, dust, and disruption for tenants, and kept these materials out of the landfill.

The new highly insulated air-tight building envelope reduces the overall energy requirements of the building, while the electrified mechanical system eliminates GHGs and is much more energy-efficient, ensuring minimal energy loads. To cap it all off, a 34.8 kW solar array was installed on the roof. This system can produce as much energy as the retrofitted home will consume in a year, making the building a Net-Zero Home.

Using the plethora of sensors installed throughout the project, including IAQ sensors, temp sensors, energy monitoring, solar monitoring, temp/RH/moisture monitoring in the panels and attic, and a weather station, the team is able to confirm that the building continues to perform as expected

That means the pilot project is feeding OCH data on how such a retrofit impacts the building and its occupants’ comfort, enabling them to improve their process in the future, and what a future it could be. The OCH Net-Zero pilot project has resulted in a replicable, scalable process for retrofitting to significantly reduce or even eliminate GHG emissions from Canada’s existing housing and building stock. Indeed, OCH is already developing a strategy to deploy a similar retrofit to another five hundred townhomes in the next five years and expand the approach to include mid- and high-rise buildings.

Equally important has been the interest that an actual deep energy retrofit on occupied units has generated in the industry. From manufacturers to portfolio managers to general contractors, several companies have contacted the team to discuss this pilot and how to expand its application. As opposed to discussing theoretical concepts, the industry has a tangible example of how to achieve a deep energy retrofit of an occupied building, and with it, an understanding of the business opportunity that such projects offer for everyone involved.

The Ottawa Community Housing Net-Zero PEER Pilot is clearly a retrofit to be tried.